Born in 1986 in Kraków, Markowski lives with his family in Bydgoszcz. Photographer-autodidact, he graduated from the Higher School of Economy in Bydgoszcz with a degree in sociology. He started taking photographs in 2006. Markowski worked for daily newspapers for 8 years. In 2015 he became a member of the Sputnik Photos Mentorship Program. A year after he joined Un-Posed, a street photography collective. He is the recipient of a grant from the Ministry of Culture and National Heritage. Winner of some of the most prestigious photo competitions in Poland and abroad, Markowski received the important Photographer of the Year award in the Event category for the International Photography Awards 2016. He was also ranked first in the competition for the Photojournalist of the Year 2016 held by polish Association of Photojournalist. 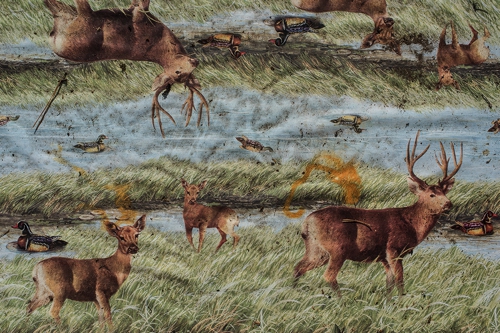 The city hall could be considered to be the central point in Bydgoszcz, a city in the Kujawsko-Pomorskie Voivodeship. It is 106 kilometers in a straight line from the farm of Mr. and Mrs. Felski. The population of Bydgoszcz stood at 354,990 in mid 2016. There are four people in the Felski family: Andrzej and Katarzyna, their daughter Victoria and her grandfather Bruno. Together, they make up the entire population of a small village also called Bydgoszcz, situated in the Pomorskie Voivodeship. Brno did his military service in Bydgoszcz (nowadays the eighth largest city in Poland) in 1962. Apart from Bruno, there is also another link connecting the two Bydgoszczs—the Brda River. 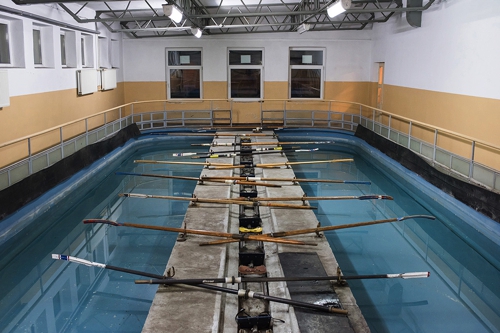 The Rowers’ Club RTW Lotto-Bydgostia was established in 1928. It won the national championship 28 times and in a row for the last 24 years. Since 2000 members of the club regularly have come home from the Olympics with medals, which is due equally to the hard work of the coaches and to the rowers’ determination. The pool, where young rowers improve their technique, was built in the 1950s. The club is lucky with the river: the Brda gets frozen late and melts early. Thanks to these conditions, the rowers can practice on the river almost all year round, from which, in the past, even the national team profited. 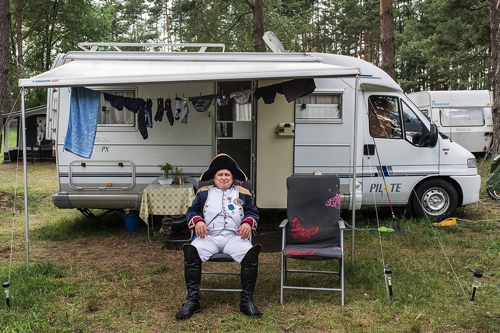 You can find a legend on the Internet claiming that Napoleon crossed the Brda with his army near the small town of Drzewicz in 1810. A curious tourist can find a stony plaquette in the place the Emperor presumably rested under a linden. Piotr Lenart, in costume, often takes part in reenactments. His arrival to the campsite in Drzewicz triggered interest in the resting campers. Aleksandra Siatecka, who was one of them, confessed that she made up the whole Napoleon legend with her friends at a party with the help of alcohol. How could she predict that the whole scam would unleash to the effect of visiting buses with French tourists. 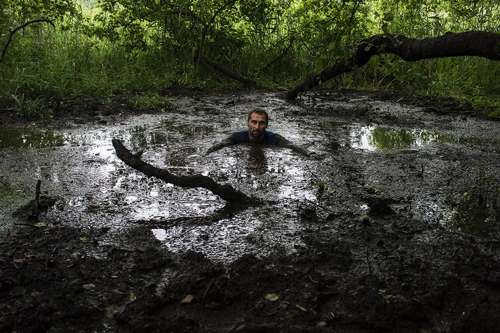 Włodzimierz Niewiadomski has been running survival camps for 30 years. Before then he used to run in forests and was passionate about survival skills. The forest is his passion. He can sense all the changes in it just by observing nature. One of the tasks in his training is crossing the swamp near Zamrzenica. He believes that people fear swamps without reason and this exercise helps overcome this fear. „The swamp is good for health” he assures us and refers to a story about how he cut off the tip of his finger. To the surprise of doctors, the finger grew back after he started hanging out in the swamps. 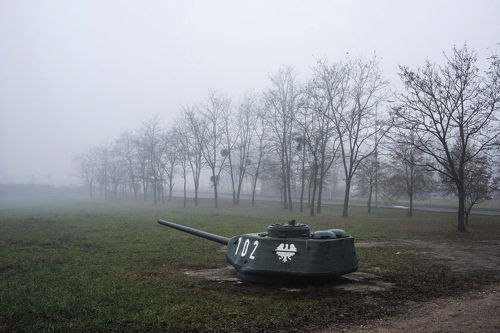 The tank turret from „Rudy 102” sticks out from the ground by the water lock Okole in Bydgoszcz. It’s the name of a fictional vehicle in which Polish soldiers, featured in a popular TV-show, „Four Troopers and a Dog”, fought in WWII. The film crew came to this place in 1969 to shoot two episodes of the show. The water lock worker Wacław Kowalski helped then with the preparation for filming. He was the best floodgater in the city, winning the competition 20 times in a row. He’s been retired for 18 years now and his wife took over his job. 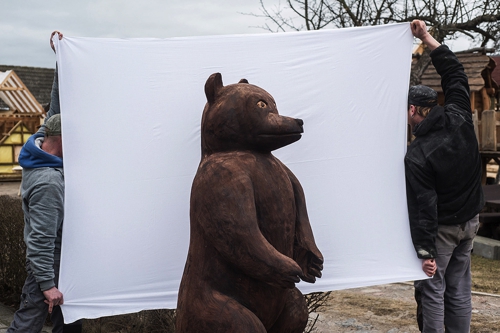 Carpenter’s Shop in Rytel produces garden furnitures and sculptures on demand. What attracts the customers’ attention is a huge wooden bear in front of the building. Waldek and Rafał hold sheets, an impromptu background for making a picture of the sculpture. It is so heavy that four men would not be able to lift it. Janusz Hilbrecht sculpted the bear in 2015. He is an artist-amateur who could not develop his passion in full. He lost a few fingers on the milling machine and now can’t do details. The sculpting gave way to the furniture business. 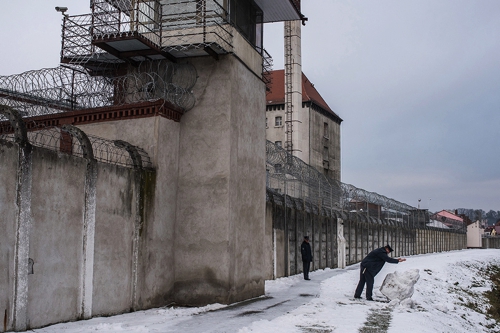 The Koronowo Correctional Institution was established in 1819 in lands that belonged to the Cistercian monastery. Its capacity is of up to 900 inmates. On one side the prison borders with the cloister, through which—via an underground passage—12 prisoners fled away 80 years ago. On the other, it has the Brda flowing by. Due to the narrowing of the riverbed—and, as it was explained, for security reasons—the Brda overflows the basement of the prison. Inmates undertake cleaning the riverbed a few times a year and it’s their contribution to the community. 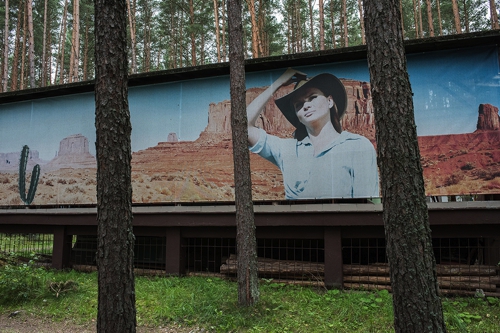 Here is the Relaxation Center Leśna Cisza in the town of Babilon, built in 1975 by the Bydgoszcz Transport Authority for its workers. After many rehabs it is now open to all tourists. The visitors like to stroll along the Brda, go canoeing, or rent a water bike. In the middle of the Centre there is a seasonal café called Arizona. The Center offers 20 rental bungalows for visitors. 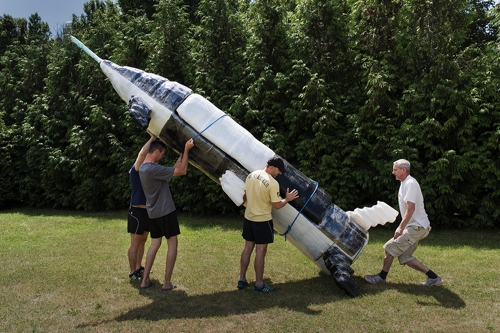 Sławek Piotrowski invented the Great Bottle Race on the Brda 8 years ago and has kept organizing it since. During this time his team managed to acquire the necessary skills of building boats from bottles. The problem is not the displacement of water, but the stability of their construction. Sławek laughs that they applied an „outerspace technology” this year. They have been building their rocket for weeks, mostly in their spare time. The method proves right. They did not drown and finished in 10th place. 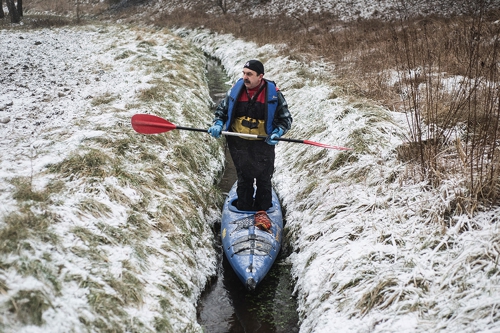 Once a year, volunteers meet at the Mylof dam to participate in the Winter Rafting of Energy Workers on the Brda. The 50th edition of the event took place in 2016. Participants traversed over 50 kilometers in 3 days. Wojciech Szala is the last segment pilot; he is paddling for the 9th time. Although he’s paddled in a lot of places, the Brda is one of his favorites rivers. At present he prefers solitary trips to organized ones, as they help him to calm down. 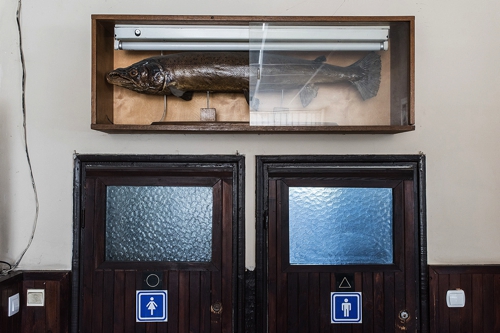 A salmon caught by an angler in Brda in 1953 embellishes the premises of the Bydgoszcz Division of the Polish Anglers Association. The river is called by anglers „The Pearl of Pomerania”. Annually the existing pool of fish gets stocked with trout, grayling, and sea trout in those legs of the river classified as mountain waters. The fees for anglers in these areas are higher than in the lowlands. The local press reported that in July 7, 2012 Marek Wilma caught a red piranha in the Brda. The fish, which lives in South America, is considered to be the most dangerous species in the world.