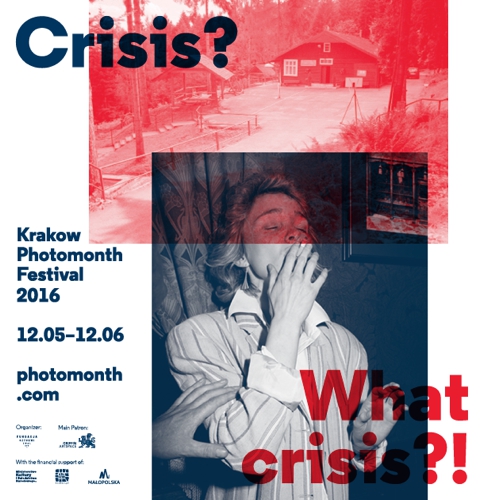 “Crisis? What Crisis?!” is the main theme of the 14th edition of Krakow Photomonth, Europe’s leading photography festival. The Main Program is curated by Lars Willumeit, German curator and cultural anthropologist. Photomonth will also feature the massively popular ShowOFF Section, another Portfolio Review with a Griffin Art Space Foundation Prize, and dozens of accompanying events. This year’s festival begins 12 May and runs, as per tradition, for an entire month.

The point of departure for this year’s Photomonth festival Main Program was the conviction that crisis is not a transitional phase or an anomaly any more, but a characteristic trait of everyday life, a permanent state with which we must cope in practically all spheres of our lives: private, public, and global. Political, economic, environmental, and migration crises concern us to the same degree as crises of identity, trust, and “individuality” in a globalized world.

Nor has the crisis bypassed photography which, in our epoch of overproduction of images, is trying to find its place. The constantly changing media landscape has forced photographers – journalists, reporters, and artists – to turn to new forms of communication with the viewer and creative use of source materials. Classical reportage no longer suffices to speak of the contemporary world and the processes it sees happening. Democratic institutions, including cultural ones, have to redefine their roles in creating culture.

“The exhibitions presented during Krakow Photomonth, each alluding in their own way to global, social, and political problems, have their own stakes in telling of the problems of the contemporary world; they are reflections upon the function of photography,” says Lars Willumeit, curator of the Main Program of the 14th edition of the festival.

The artists invited to take part in the festival use a range of strategies to address these phenomena and to comment on them. The list opens with world-famous photographer Paul Graham, whose project New Europe has become remarkably prescient in the face of the all-too-evident crisis of “European values.” A wider global perspective comes courtesy of Swiss artist Yann Mingard who draws from the notion of the Anthropocene – the first geological epoch in history which has come about through human intervention. His project Deposit, completed between 2009 and 2013, makes visible how humankind collects, stores, and classifies both biological specimens and digital information that are usually hidden from public view. To enable this, Mingard brought back images from twenty-one locations, dividing them into four sub-chapters: Plants, Animals, Humans, and Data.

Another, private perspective is adopted by outstanding Polish artist Aneta Grzeszykowska in whose work we find themes of incompatibility of individuals and roles played by human bodies. This exhibition will be displayed at MOCAK where we will also have a chance to see a rising star of world photography, the youngest Magnum nominee in the agency’s history, Max Pinckers. The project presented during this year’s festival is a story about love – of the star-crossed sort, as it is forbidden by the Indian caste culture – and universal aspirations to show happiness. The artist pairs his photographs with newspaper clippings, notes, and artifacts from wedding photography studios, which might be seen as an attempt to go beyond the crisis of classical documentary photography.

The search for new forms of visual narrative in the era of the crisis of visual media is the main motif of a collective exhibition curated by Iris Sikking. The six projects presented here take on such difficult subjects as the heroin trade, genocide, and migration; they are linked by a desire to go beyond a classical way of telling global histories, which the artists acknowledge to be insufficient. Here photographs on a wall are just as adequate form of response as a radio broadcast, a YouTube film, or illustrations from an archive. The #Dysturb Collective speaks directly about the crisis in journalism, using the walls of buildings and advertising media to force Krakow’s inhabitants to face “street news” that seldom appears in newspaper headlines.

The strong showing of photography collectives is a notable feature of this year’s Photomonth. The most world-recognized Polish collective, Sputnik Photos, will be first to open their latest project in Krakow. The materials collected and created in preparation for their travels to former Soviet republics will go to create an installation that polemicizes with the classical understanding of authorship and the autonomy of the image. We also have planned an exhibition of three art and research collectives –  the Swedish Klara Källström & Thobias Fäldt, the Dutch/Spanish Werker Magazine, and the Italian Discipula – joined by the conviction that the interpretation of the visual message depends on social and political contexts and the viewer’s convictions. This will be a laboratory of sorts, in which the viewer can discover his/her role in the process of generating meaning and representation.

But before we meet in Krakow, the Griffin Art Space Foundation and the Foundation for Visual Arts invite one and all to the former Dom Słowa Polskiego in Warsaw for Poppy: Trails of Afghan Heroin by Robert Knoth and Antoinette de Jong, opening on 23 April. This presentation runs until 3 May, and is a teaser for the festival.

Another equally important part of the festival is the ShowOFF Section which will be presenting premiere projects by young artists selected through an open competition. They have worked on the final shape of their exhibitions under the watchful eye of recognized specialists in the visual arts: Kuba Bąkowski – a visual artist who creates photographs, installations, and kinetic objects, Lidia Popiel – a photographer, lecturer at the Photography Department of the Warsaw Film School, and editor-in-chief of fineLIFE.pl web magazine, Agnieszka Rayss – a documentary photographer, co-founder of the Sputnik Photos collective, and Simon Karlstetter – a founder and one of the art directors of Der Greif, many times awarded literary and photographic project. The group of curators is rounded off by Honza Zamojski, an outstanding artist, book publisher, and designer who will be designing a photobook jointly with one of the winners of the ShowOFF Section.

This year foreign experts have joined the curators of the ShowOFF Section. And once again, all the exhibitions by young artists will be held in a specially arranged area, so that viewers will be able to compare the various projects.

The Portfolio Review and the Griffin Art Space Prize

The Portfolio Review provides an opportunity for young artists to submit their works to outstanding specialists. As every year, the group of reviewers includes Polish and foreign critics, gallery owners, artists, and theorists (including Foam Museum curator Kim Knoppers, Polish graphic artist Edgar Bąk, and photographer Justyna Mielnikiewicz). The review participants learn the reviewers’ opinions on their work during twenty-minute individual meetings and make valuable contacts. The best portfolios receive a prestigious prize funded by the Griffin Art Space Foundation.

Initiated in 2014, the Griffin Art Space Prize aims to promote interesting and mature art projects. The winner, selected from participants in the Portfolio Review, will be able to create a professional collector’s folder and present his/her work in the form of an exhibition. The folder of last year’s winner – Wiktoria Wojciechowska – will be on show during the festival at the Lubicz Office Center where the review takes place.

The accompanying events are an important part of the festival. Special attention should go to the Master Series meetings. We have invited both artists presenting their work in the Main Program and specialists to enrich the discussion around the theme of the festival, or to speak of the ongoing fashion for photobooks, such as photographer and critic Jörg Colberg. The program of events is filled out with book premieres, workshops, presentations, film screenings, and guided tours by the curators.

The Krakow Photo Fringe is an independent platform bringing together submissions sent in by artists, animators, activists, galleries, and all those whose passion is photography. The success of the two editions to date – which have included over one hundred events and exhibitions – has led the organizers to expand the Photo Fringe to cover the entire Małopolska Voivodeship. This year exhibitions and events will take place in Zakopane, Tarnów, Wieliczka, and Myślenice. 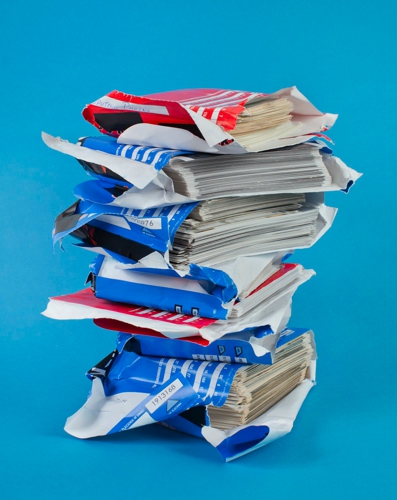 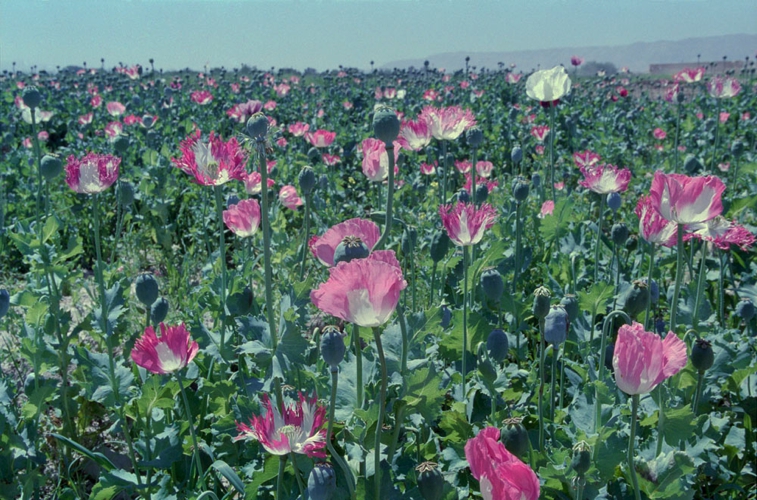 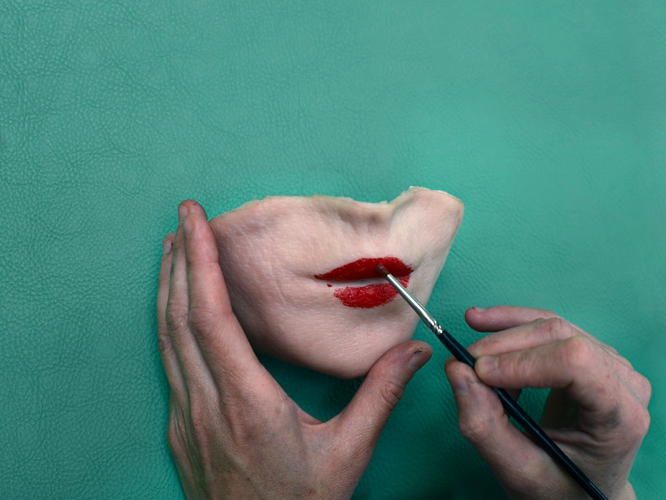 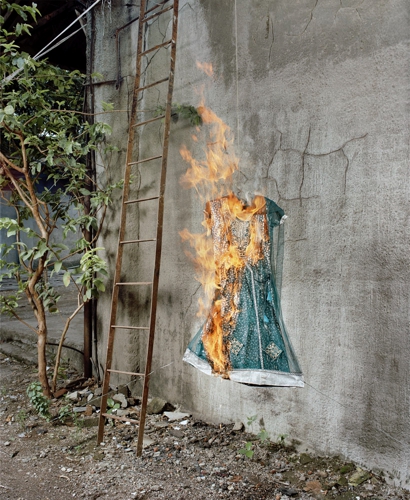 Max Pinckers, Rajnish & Pooja at the Love Commandos shelter, undisclosed location, India, 2013, from the Will They Sing Like Raindrops or Leave Me Thirsty series © Max Pinckers 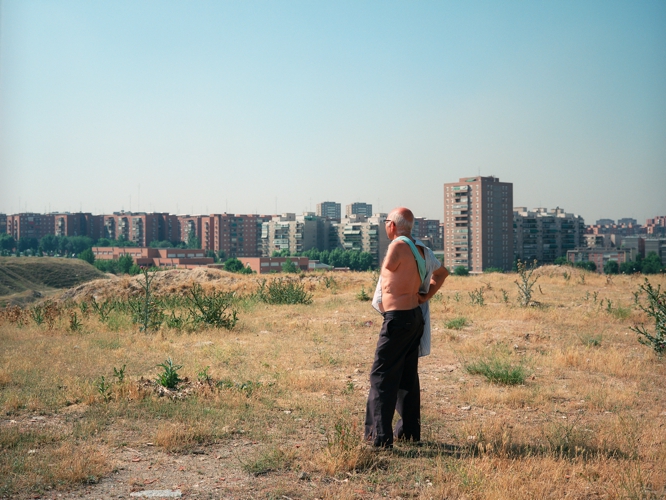 THE FOUNDATION FOR VISUAL ARTS

The Foundation for Visual Arts is a non-governmental organization created in 2001 in Krakow. It aims to promote and to popularize the visual arts in Poland. The foundation’s main field is photography, and its mission is to redefine it in the context of contemporary art, history, and sociology. Apart from the annual Krakow Photomonth Festival, the foundation runs long-term projects, like the research of the Zofia Rydet archive, promotion of the work of Jan Dziaczkowski, and the Rajza po Kato interdisciplinary project.

Krakow Photomonth is made possible through financial support from the City of Krakow Council, The Ministry of Culture and National Heritage, and the Małopolska Voivodeship.

See you all there!